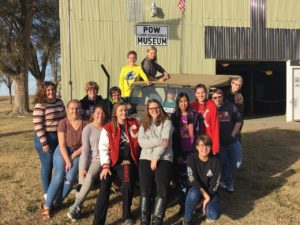 The Concordia High School Drama Dept. was rehearsing an original play written by theatre director, Chris Stiles. It was a WWII drama about young Dutch women imprisoned as enemies of state.  The female prisoners were held in what they called The Orange Hotel.  Among the young women, the color orange had become their symbol of hope that, one day, peace would come and the constant threat of Nazi domination would be crushed. As a run-up to production, Stiles arranged for his cast to tour the POW Camp Museum.  Foremost, they were there to learn further about wartime imprisonment of young people of a similar age and that the contrasts between prisoners held under American military standards and those controlled by the Nazis were dramatically different. Very few of the students had knowledge of the Camp’s existence, even though it was once located in their own backyard. On closing night of the play, Stiles thanked the POW Camp for providing students with the experience of walking in the footsteps of those young prisoners from another land.

With a grant from the Hansen Foundation, a new septic system, running water, and a flush toilet were recently installed at the POW camp.   Visitor participation since the installation has increased, as have educational opportunities for visitors.  Prior to the restroom installation, Cloud Tourism associates cautioned visitors to “go before you go” explaining that there were no “comfort facilities” located at the POW site. Thankfully, “go before you go,” has been replaced with the more positive, “linger longer.”

in GRANT STORIES /by Betsy Wearing