You are here: Home » NEWS » GRANT STORIES » Exhibit commemorates women who fought for right to vote

Exhibit commemorates women who fought for right to vote 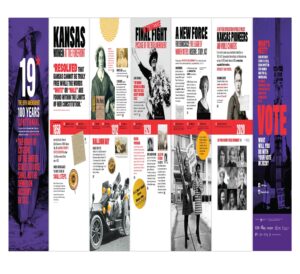 Kansas suffragists helped bring about the greatest expansion of democracy on a single day when the 19th amendment giving women the right to vote was passed. An exhibit commemorating the centennial of that event was created by the Kansas League of Women Voters.

The exhibit, which received grant funding, will continue to be available into 2021 to accommodate requests and reschedule venues that had been scheduled during COVID-19 closures. The March to the Polls will also occur in Hays and Ellis County September and October. Marchers will walk from election offices and register voters.

The names of women who fought for voting rights have largely faded from memory. Here are a few of the Northwest Kansas women who helped ensure that today’s women can vote:

Lilla Day Monroe, Wakeeney: Suffragist with interest in the law, who passed the bar examination and was admitted to practice in the Kansas Supreme Court on May 7, 1895.