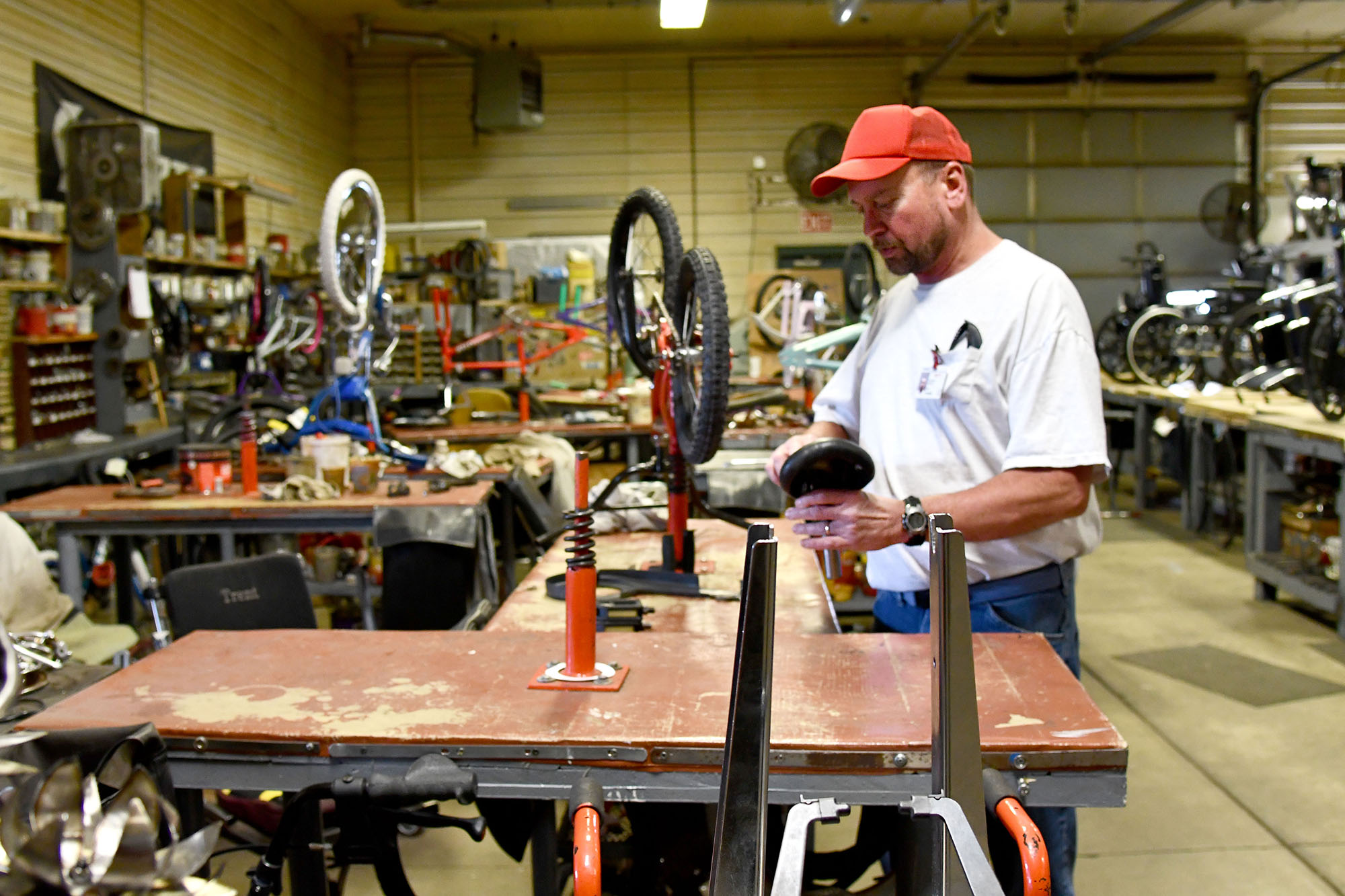 Ellsworth Correctional Facility inmate Brad Anderson, who is in his sixth year of working in the prison bike shop, said that more than 2,000 people benefited from bikes and wheelchairs refurbished by inmates in 2018.  [PHOTO BY ERIN MATHEWS]

ELLSWORTH — Ellsworth Correctional Facility inmates have a variety of opportunities to find a new start.

Inmates help people with disabilities by restoring wheelchairs as part of a Wheels for the World program and raising service dogs for CARES Inc., of Concordia. Some inmates repair, clean and determine the prescription strength of glasses donated to the Lions Club for distribution internationally.There are additional opportunities made possible through the Spiritual Life Center, located in the center of the prison grounds.

The Spiritual Life Center’s RightTrack Foundation pays for supplies needed in the custom crafts shop — where inmates use woodworking tools and other equipment — and a bicycle repair shop next to it. Inmates who work in those areas are paid by the state, earning 60 cents to $1.05 per day

Prison Chaplain Dale Bailey said the custom crafts area was created after inmates began making mophead angels, which were sold to raise more than $30,000 toward construction of the Spiritual Life Center.

Inmates John Carr and Marty Miller lead the six-man woodshop crew. Carr said the crew enjoys what they do, and it’s a privilege they don’t want to lose.

“If you don’t have anything to lose, you’re going to act a fool,” he said. “Here, they give you more opportunities to be part of something good.”

In the custom crafts shop, inmates have produced a variety of community projects, including carved stone signs, pamphlet display racks, a cross for a church pulpit, vacation Bible school scenery and toadstool-shaped seats for a kindergarten classroom. Anyone who has seen Sheriff Whitney get shot during Ellsworth Cowtown Days would have noticed the inmate-constructed Old West backdrop.

Inmates also make wooden jewelry boxes, birdhouses, piggy banks and other gift items that are sold to benefit the foundation. Items are available throughout the year in the prison visitation room and in the Kansas Originals, Smoky Hill Rustic and Ellsworth Museum stores. They are also sold during the annual dinner theater performances.

Carr, who has worked in the woodshop for eight years, had no previous woodworking experience. Now he orders supplies and helps teach other inmates how to use the equipment.

“I love being able to give somebody some sort of skill and show other people who come here that there is a worth to us and our skills can be used for good other than our own agenda,” he said. “It’s not just about me. It’s about us.”

Miller, who had previous carpentry experience, implemented a more structured training process for inmates who are new to the custom crafts area. He said he enjoys making items that are sold to benefit the RightTrack Foundation and helping inmates learn a trade they could pursue outside of prison.

In the bike shop, inmate Brad Anderson passes out more than 50 sack lunches at midday. The people who eat them are working on refurbishing bikes, wheelchairs and fabricating metal crafts. Some of them are also taking welding classes through Barton County Community College.

Bike shop workers have the tools they need to reupholster seats and repaint the bike bodies. They use the same equipment to restore wheelchairs, like the 113 chairs that came in a shipment two years ago from theme parks near the ocean.

“They were so corroded and rusty you couldn’t beat some apart,” Anderson said.

In 2018, more than 2,000 people benefited from bikes and wheelchairs made usable again by inmate labor, he said. Wheelchairs are distributed internationally, and bikes are given away at the state fair and distributed by civic and charitable groups, many as Christmas gifts. Paroled inmates who need transportation can apply for a bike.

“When you get the idea of the ability you have to help people and pay it forward, it’s really gratifying for us,” Anderson said. “It makes us feel like we’re back doing something and contributing.”

Bike parts are complicated and come apart quickly. Anderson said that in the six years he’s worked in the shop he’s trained so many men on fitting bikes back together that he can’t remember all their names.

Bicycle parts are also expensive. The RightTrack Foundation has started underwriting costs when usable parts can’t be found in the bike bone pile.

“When I first came out here, we had nothing,” Anderson said. “We had no monetary way to buy cables, tires, tubes, paint, reflectors. All the safety equipment is terribly expensive. If we were to have a hard year with a lot of tires and tubes, we’re going to be in the $12,000-plus range.”

Worn bike chains and other spare parts are transformed into amazing, detailed works of art that are sold along with the woodcrafts.

Anderson said many people benefit from the work, including those who do it.

“This is helpful to the communities and the parole stations and all the places these go to, but it does a lot for the guys up here who are in prison that otherwise wouldn’t have anything to do with their time,” he said.

In July, inmate members of the Post Rock Jaycees presented a distinguished service award and a $10,000 check to the Raise My Head Foundation, a Wichita nonprofit that helps victims of sex trafficking. The prison chapter of the Jaycees also recently raised more than $6,500 for the Ellsworth County Cancer Fund and have previously donated to other local causes.

Todd Britton, who retired in June from his job as public information officer at the Ellsworth prison, said he led tours of the facility as often as he could, because people have the wrong impression of the place.

Britton said perhaps the Ellsworth prison provides more opportunities for inmates who want to change their lives because the only constant at the prison has been change. Wardens have rarely stayed for more than a few years before they are promoted to bigger state prisons.

“Every time we turned around, they were trying something new within the state here, and we were the experimental facility,” he said.

Ellsworth Correctional Facility is first a prison. The men who live there aren’t there by choice. Some inmates only participate in programs for good-time credit, and some “boomerang” back to prison shortly after release.  Emergency lockdowns resulting from inmate violence periodically happen at the facility.

However, Britton said the Ellsworth prison bears little resemblance to prisons shown on television, and he believes it’s important to correct false impressions.

Britton recalls an incident that occurred shortly after the prison opened. Some of the first offenders housed at Ellsworth were transferred from the Hutchinson Correctional Facility, where they were used to being behind walls. Instead of walls, the Ellsworth prison is surrounded by a razor wire fence.