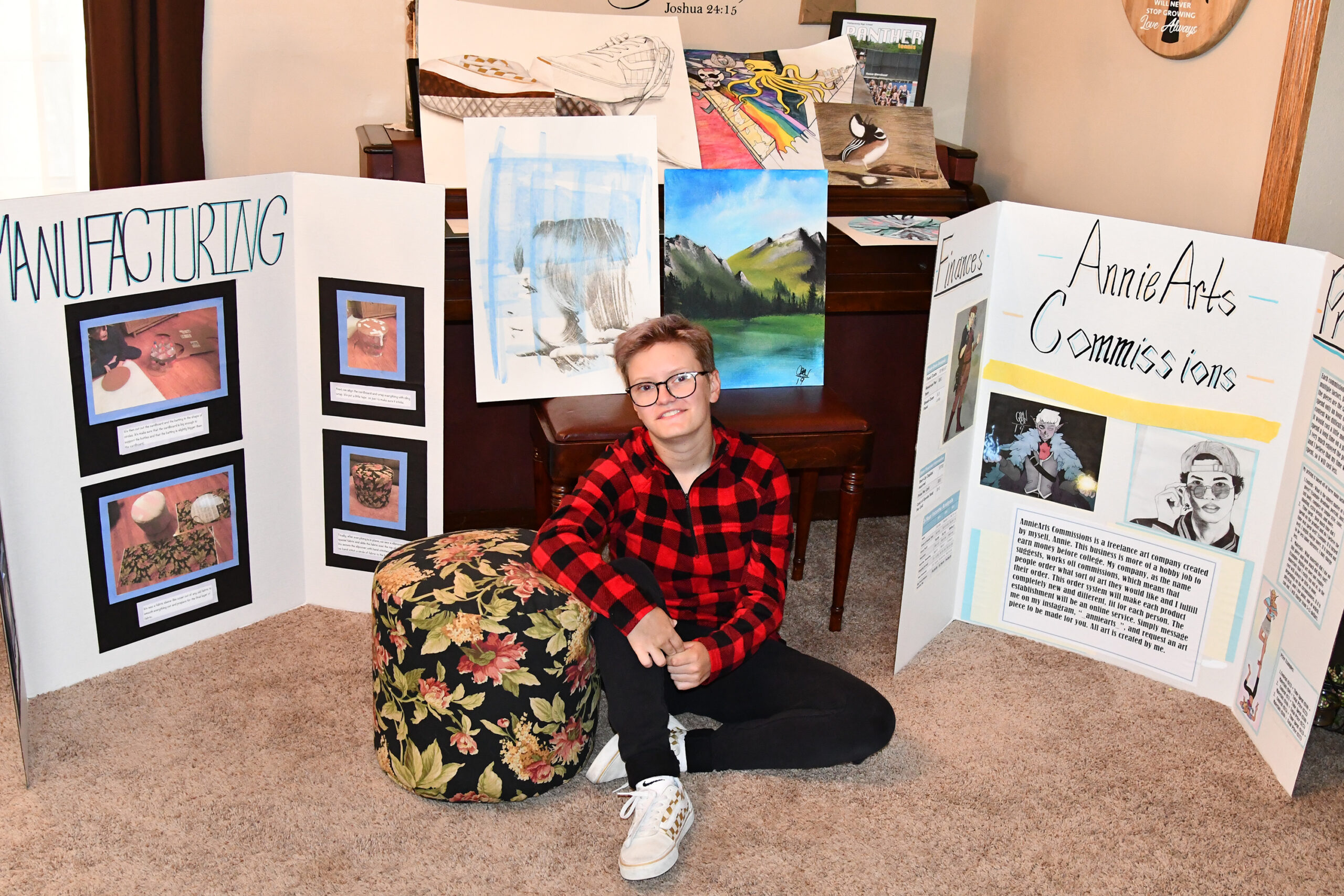 Annie Weishaar is shown here surrounded by her works of art and an ottoman she made out of pop bottles. [PHOTO BY ERIN MATHEWS]

[PHILLIPSBURG] A brother and sister in Phillipsburg are exploring the business potential in their own unique talents.

The first year Annie competed at the state contest, she and a partner made ottomans out of two-liter plastic bottles. In April, she competed a second time, with Annie Arts Commissions.

Annie’s artistic and writing skills helped her be chosen as one of 14 students nationwide to receive a Family, Career and Community Leaders of America scholarship that paid for a six-week visit to Japan, home of anime, a hand-drawn and computer animation style that inspired her early work. In Japan, she got to participate in a traditional tea ceremony, make origami and flower bouquets, take a cruise with her host family and go to the base of Mt. Fuji.

“I feel like I gained a better understanding of the culture in general,” she said.  Before traveling to Japan, Annie learned to say several phrases in Japanese, including “Do you speak English?”

“Quite a few people do speak English,” she said. “If they don’t, and you ask them if they do, nine times out of 10 somebody else will overhear and say they can help you. People in Japan are really considerate.” 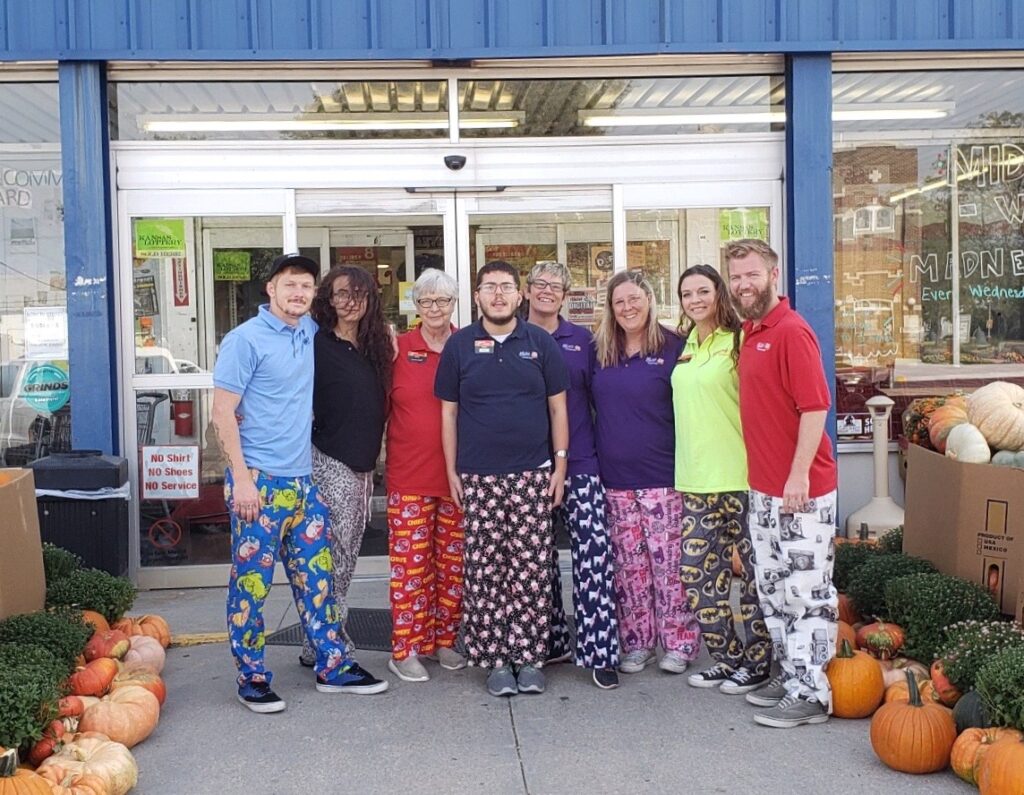 Alec Weishaar, center, is pictured with coworkers wearing pajama pants he made them. Everyone wore their pajama pants to work as a surprise on Alec’s birthday. [COURTESY PHOTO]

Alec enjoyed hearing about her adventures in Japan so much that he picked an Asian print fabric to make her a new pair of pajama pants.

Alec, who is autistic, discovered in 2008 that he enjoyed making pajama pants. He was in eighth grade, and his family was living in Salina when he made that first pair in a Family and Consumer Science (FACS) class at South Middle School.

He made himself seven more pairs before branching out to create pajamas as gifts for friends and family. Alec celebrated Christmas and occasions like family vacations by making special pajama pants for his whole family. Now his dad, Jeff, has two stacks of them, and Alec said he is making pajamas for his family only on even years.

At age 26, Alec has a “rotating, never-ending” waiting list of people who have ordered pajamas through his business, Fancy Pants by Alec, Deb Weishaar said. Toward the end of September, he was working on pair No. 577, which was to go to a volunteer firefighter in Phillipsburg. He had already sewn pajama pants for almost the entire 11-man crew.

“The fire department won’t need pajamas anymore, will they?” Alec asked his mom.

Alec remembers each customer and each pair of pajamas he made for them. For example, pairs 269 and 270 were made from Shantung silk fabric, and they went to a family friend in New York City and the friend’s mother in Great Bend, he said. A photo of the satisfied New York customer modeling his silk pajama shorts can be seen among the dozens of photos of smiling customers on Alec’s website.

Alec said a pair of long pajama pants usually requires 2 ½ yards of fabric; capris require 2 yards, and shorts call for 1 ½ yards. Each pair usually takes three days to make, with the cutting on day one, sewing straight seems and curves on day two, and adding the elastic and hems on the final day.

“If we would work on them every single day all day long that would also make him happy,” Deb Weishaar said. “Instead, we kind of try to spread it out.”

Alec makes the pajamas a perfect fit by taking waist and out-seam measurements. He likes selecting the fabric.

“He likes to pick fabric based on what you enjoy, so he really feels like he has to get to know the person,” Deb Weishaar said. “That’s been the trickiest thing about turning it into a business. Sometimes people who really want them and make lots of hints about getting a pair, still don’t end up with a pair if he can’t find the right fabric.”

She said part of the reason the family decided to move to Phillipsburg from Salina was because they believed Alec could thrive in the smaller town environment.

“We love living in Phillipsburg,” she said. “We’ve been here eight years now, and the community has really embraced Alec. He’s able to drive a golf cart anywhere in town as long as he’s not on the highway, and he has a lot of freedom here.”

Alec fits his pajama business in with an otherwise busy schedule. Most mornings, he works at the grocery store, and most afternoons he volunteers for one of four local charities.

On his birthday recently, his co-workers at the grocery store all wore their fancy pants to work to surprise him. Alec was happy to join them, wearing one of the 38 pairs he has made for himself.

Deb Weishaar now teaches FACS at Phillipsburg High School, and she plans to have Alec come and coach her seniors when they do their pajama project later in the year.