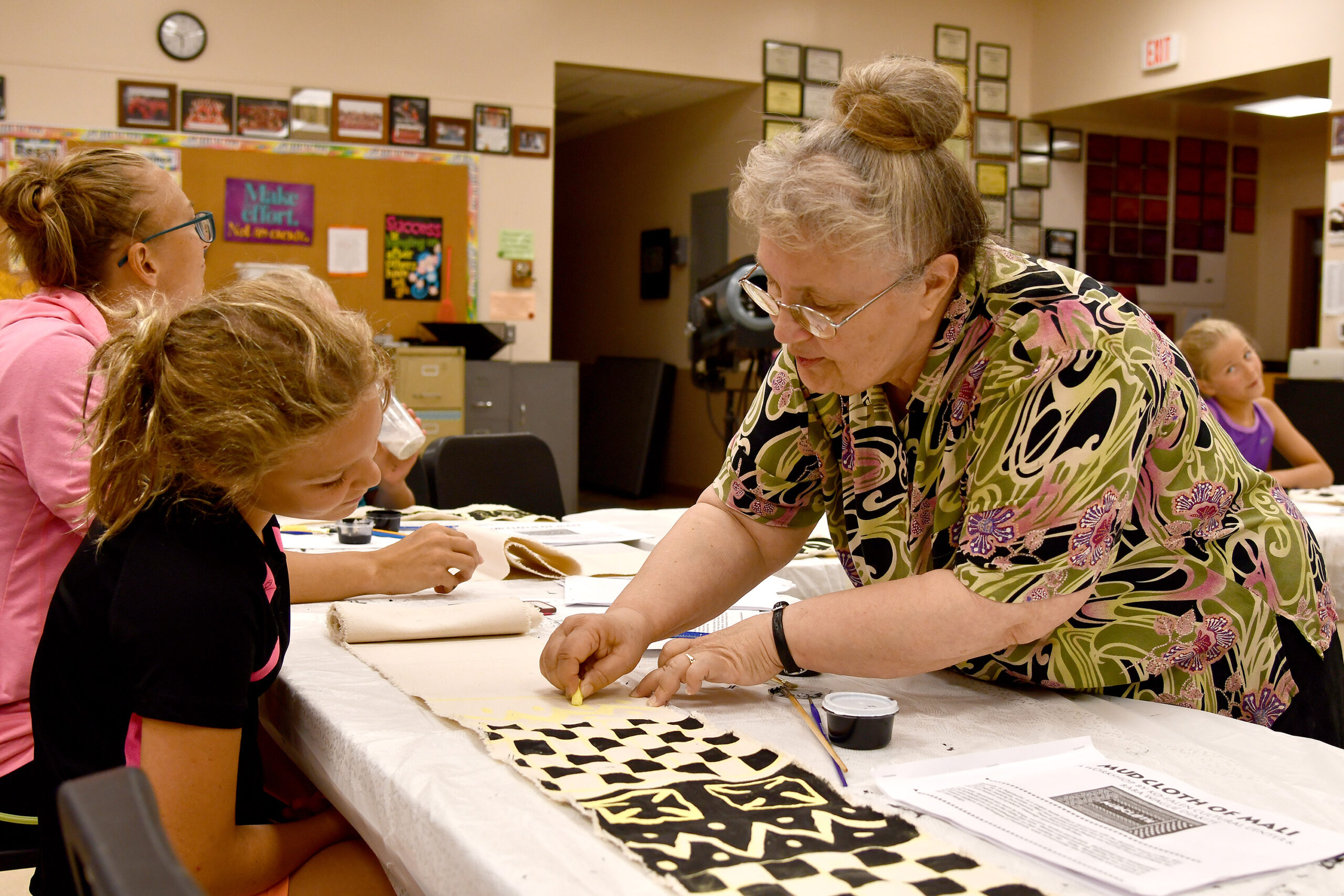 Artist Ronna Neuenschwander assists a member of the cast of the Atwood production of The Lion King with making a mudcloth that she will wear as part of her costume.  [PHOTO BY ERIN MATHEWS]

Sculptor Ronna Neuenschwander knows just how life-changing the arts can be.

That’s why the Hoxie native was so thankful to hear that Bonnie Cameron had returned to her hometown and was doing children’s theater.

Neuenschwander and her husband ­— storyteller and children’s author Baba Wagué­ Diakité – are using their artistic abilities to regenerate community in Diakité’s home country of Mali in West Africa.

The couple, who live in Portland, Ore., are ensuring that young people in Bamako, Mali, can support themselves and their families by producing traditional arts and crafts.

Diakité’s brother and other teachers also tutor more than 100 neighborhood children at the Ko-Falen Cultural Center, co-founded by Neuenschwander and Diakité.

The couple were in Atwood in July to teach children involved in the Main Street Summer Theater Festival’s production of The Lion King how to make mudcloth, a textile artform traditionally made by the Bamana people of Mali. The mudcloths, which students decorated with symbols that described the characters they portrayed, were worn as part of their costumes during the musical.

The Atwood children used black fabric paint and yellow chalk to create their mudcloths. The young people at the Ko-Falen center use Mali mud to stain their cloths a rich brown color.

“It’s like magic,” Diakité said. “The minute you touch the cloth with the mud, it goes dark.”

He said that in Atwood they focused on the symbolism of the mudcloths, which Malian women have made for centuries as “diaries” about their families. They wore them on their inner skirts and passed them on to granddaughters on their wedding day.

“We tried all the mud around here thinking it would work — it never worked,” he said. “We worked with museums that import clay from Hawaii. They think it’s just an iron component in the clay.”

Diakité said he has received a letter of authorization from the University of Iowa Museum of Art to bring clay from Mali, and at future workshops he hopes to be able to demonstrate the traditional process.

Cameron, founder and creative director of the theater festival, said she first brought Neuenschwander and Diakité to Hoxie to demonstrate the making of mudcloth two years ago, when The Lion King was being produced there. The ACE Foundation of Rawlins County underwrote their appearance in Atwood.

“I didn’t want the kids in the cast to have crazy American ideas of what we think African culture is,” Cameron said. “I wanted them to really experience true African culture and African art.”

She said that this year a Goodland man who came from Ghana also taught the choreographer of the Atwood musical traditional African dance moves.

Neuenschwander met Diakité more than 35 years ago while traveling to Timbuktu, an ancient city in Mali. They were able to communicate only in French at first, as she didn’t know the multiple African languages he could speak, and he had yet to learn English.

Neuenschwander, who earned a bachelor’s in ceramics at the University of Kansas, was working on a series of pieces depicting man’s use of camels throughout history and had gone to Africa to observe camel caravans in the Sahara Desert. Diakité joined her in Portland about a year and a half later.

While the children in Atwood worked quietly on their mudcloths, they listened to Diakité tell stories and sing songs he learned while growing up in Mali. His many captivating characters included an old man who danced with wild animals, a medicine man who stacked live crocodiles on his head and a wealthy mosquito who wanted to buy a house.

“African folktales are very complex,” he said. “Even though animals are used as elements of stories, this is how we solve social problems. Animals are representing human beings.”

When students completed their mudcloths, they brought them to the front of the room and explained the significance of the symbols they had chosen.

Xavia Brenn, 13, of Atwood, who portrayed Sarabi, Simba’s mother, pointed out various features of her cloth.

When Miles Klein, 6, of Atwood, said that if he made his mudcloth any longer he would trip on it, Diakité told him what to say so that Neuenschwander would bring the scissors.

Diakité has preserved some tales in children’s books that he illustrated. He told the Atwood children, many of whom had parents who were busy cutting wheat, that everyone in Mali participates in the annual harvest celebration, which includes a lot of dancing.

Diakité said what he misses most about living in Mali is always having family close. After growing up living in a compound with the rest of his family, he said his house in Portland sometimes feels lonely.

Gracyn Higley, of Atwood, a summer intern with the theater festival who portrayed Nala in the show, said that last summer she worked on animal science projects in The Gambia, a small country near Mali, as part of a Kansas State University exchange program. Higley said she struggled with loneliness after returning home.

“I had more culture shock coming back than I did going,” she said.

Diakité said (and Higley agreed) that the language barrier an American would face traveling to Africa is not important.

“The best language you can speak is actually your personality,” Diakité said. “What they see is your involvement and your connection and your humanity. That’s what’s most important.”