BONUS STORY: ZOO TO YOU!

These animals travel to area schools with zoo educators 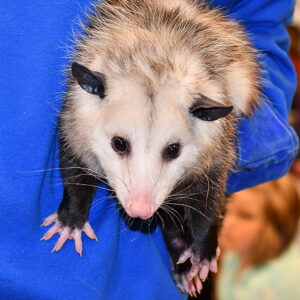 Miss Crockett, a Virginia opossum, is considered elderly at not quite 3 years old. In the wild, opossums have a typical life span of one to two years. Opossums are native to Kansas and have a prehensile tail, which they can use like an arm. They are active at night and are not picky eaters – often dining on dead animals, rotten fruit or vegetables and insects, including cockroaches and ticks. They have 50 sharp, pointy teeth, more than any other North American animal. They are the only marsupial in North America and can give birth to as many as 26 babies in a litter, but less than half will survive in their mother’s pouch, said Jessica Olp, education curator at Rolling Hills.

“They do something actually pretty cool when they get super scared for frightened,” Olp said. “They’re very slow and clunky, so one of their defenses is they play dead.” 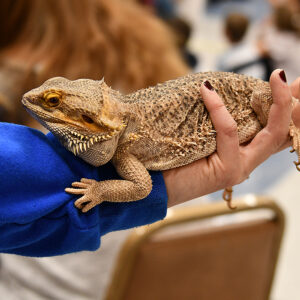 Beardy B, a 4-year-old inland bearded dragon, is native to the desert in Australia. A bearded dragon has spikes on its body that protrude when it is upset, and its throat can puff out and turn black like a ferocious beard. It can stand on its hind legs and run up to eight miles per hour. 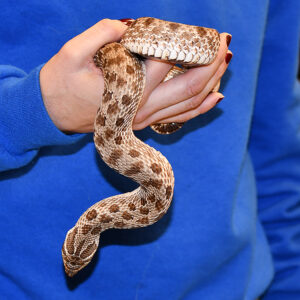 Arthur Hoggett, is a 4-year-old western hognose snake, which is native to Kansas. Hognose snakes use their turned-up nose to burrow in the ground hunting for toads and frogs to eat. They have a toxic saliva that helps them digest food, and they will bite, so it’s not a good idea to catch them in the wild. They hear by sensing vibrations, and they smell by flicking their tongues in the air to pick up chemical particles.

“These guys play dead too, but they don’t just faint, like the opossum,” Olp said. “The hognose is the biggest drama queen. He will flip over on his back, spread out his cheeks, stick out his tongue and make his eyes and mouth bleed. He’ll throw up his last meal and even go to the bathroom all over himself and shake and convulse like he’s having a seizure. Nobody wants to touch something that’s bleeding and may be sick, right?  Predators will leave it be.” 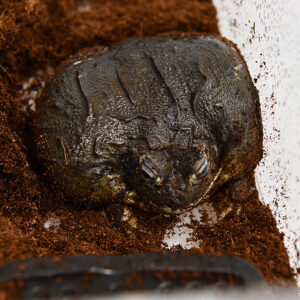 Delores, a 14-year-old African bullfrog, could live up to 40 years. African bullfrogs, native to southern Africa, can grow to the size of a dinner plate by eating small insects and birds. They coat themselves with a mucus cocoon and burrow underground to go into a state of dormancy called estivation for as long as four years to survive hot, dry conditions. 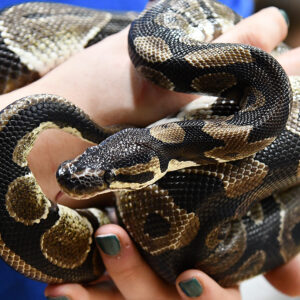 Zeus, a 9-year-old ball python, is native to central and west Africa. Ball pythons grow three to six feet in length. They gained the name because they curl up in a ball with their head tucked in the middle if stressed. Cleopatra and other ancient royalty are said to have worn the docile snakes as jewelry, so they are also known as royal python. Pit organs, which detect heat, allow them to see infrared images of their prey at night.