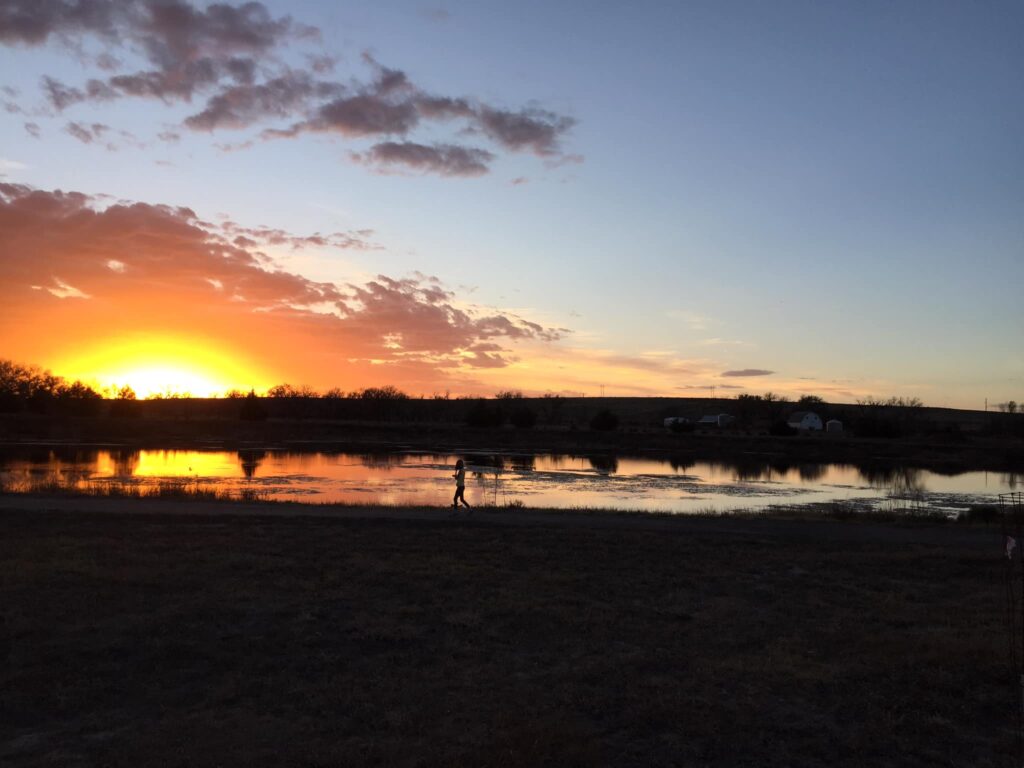 Find out more about applying for the Kansas Trails Council’s Trail in a Box program at kansastrailscouncil.org. To find a trail near you, visit getoutdoorskansas.org/trailsfor a map of more than 3,000 miles of trails in the state. You can also download the getoutdoorsKS app, which will direct you to nearby trails.

Jillian Bohl donned headphones, strapped the noisy leaf blower on her back and set about clearing debris. During two days of work in December, the Phillipsburg High School senior watched with satisfaction as the new trail she and her volunteer crew created in a Phillipsburg park took shape.

“We cleared the surface and bench cut it so the water won’t wash it out,” she said. “It’s really cool to see that happen, because it goes from an area that has nothing to do on it to this awesome trail you can walk and bike and run on.” 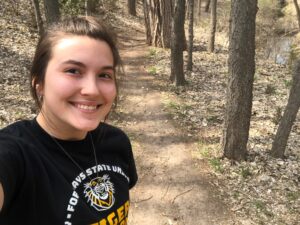 Completing the nature trail late last year that weaves for about a mile around Phillipsburg’s City Park helped Bohl qualify for the Girl Scouts Gold Award. At the time, she had no way of knowing how important her gift to the community would be.

Within months the COVID-19 pandemic introduced social distancing as the norm, and organized sports and other activities were no longer available. However, people could still enjoy walking the trail, as long as they maintained a safe distance from each other.

“It’s so therapeutic to be out on a trail both to keep your physical and your mental health the best,” said Mike Goodwin, board member of the Kansas Trails Council, a nonprofit organization dedicated to the development and enjoyment of trails across the state. “We encourage people to do it, but do it safely — keep a distance.”

BLAZING THE TRAIL IN PHILLIPSBURG

Bohl said she decided she wanted to develop a trail after observing people walking along the side of the road when she would drive to school from her rural Phillipsburg home. She proposed the idea at a community meeting where a process called Strategic Doing was being utilized to develop and complete community projects. Through the Strategic Doing effort, the trail project began to move forward and more volunteers joined in. Soon the work began.

“When we were working on it, a lot of people came over and asked what we were doing,” Bohl said. “They were really excited because now they had some place safe to walk their animals and not feel like they were going to be hit by a vehicle.”

Bohl applied to utilize the Kansas Trails Council’s Trail in a Box program. She was approved to borrow one of the council’s five trailers, which are equipped with all the necessary tools for creating and maintaining a sustainable natural-surface trail. Goodwin delivered the trailer to Phillipsburg and instructed volunteers on proper trail-building techniques.

“While I was doing this, I found out that I love being in nature and bettering my community, so I decided I wanted to do another one,” Bohl said. “I was brainstorming where I could do that and decided on the lake at Logan.”

Bohl began assessing the lake area for a possible trail construction in April. She was allowed to keep the trailer to complete that project as well.

Bohl said after she graduates in May, she plans to attend Fort Hays State University. Her goal is to become a family physician and return to Phillipsburg. She believes the trails she is creating now could help ensure that her future patients are healthier.

The Phillipsburg trail is just one of a variety of trails that have been developed in area communities in recent years. Community trails offer daily accessibility for regular exercise in attractive spaces. They provide a great addition to the hiking opportunities in Northwest Kansas’ state parks and other scenic locales.

ON THE MOVE IN RUSSELL

In Russell, a circular concrete path that is more than a mile long and six feet wide was added in Memorial Park. Members of Russell PRIDE and Rotary Club worked together on the $220,000 project, which was completed in 2017 with grant funding from the Dane G. Hansen Foundation and other agencies.

“We knew there was a need, but it was hard to quantify,” Krauss said. “Once we got this thing going, we got a lot of community support during the planning process, and once we got it installed and open for use I had people coming up to me every week telling me how wonderful they thought it was and how glad they are that we did it. It has really become a jewel for our community. It is extremely popular. You almost can’t drive past the park without seeing someone out there walking.”

PATH AROUND THE POND 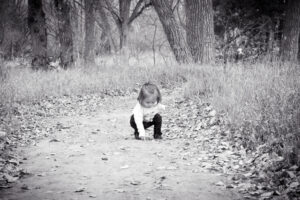 St. Francis residents have a river walk and path around Keller Pond on the edge of town to enjoy. The area was among those featured at the state Capitol during the 2019 Sunflower State Trail Appreciation Day.

The six-acre pond is actually two connected ponds made in former gravel pits on Tom Keller’s family ranch. The ranch leases about 50 acres around the ponds and river to the city for community use. Area residents can enjoy a hard-surface trail that is five-eighths of a mile long around the pond, as well as an adjoining mile-long nature trail along the Republican River.

Cheyenne County Wildlife, a local nonprofit group, stocked the pond with fish, and although the usual contest for kids was not held this year, the pond remains open for fishing.

“Since the kids are out of school, I’ve noticed them out there with their parents,” Keller said. “I think parents are using it as a means of getting them out of the house, and obviously there’s adequate space so they can socially distance.”

The pond trail, which is compliant with the Americans with Disabilities Act, is made of asphalt millings from a nearby highway improvement project. It also includes a walking bridge over the area where the two ponds connect. A $25,000 Hansen Foundation grant helped fund creation of the hard-surface trail in 2016.

“It is amazingly firm, and people are running and walking on it,” Keller said. “There are individuals with motorized wheelchairs and mothers with their strollers. It has worked out quite well.”

More recently, grant funds have helped cover the cost of clearing dead trees and invasive species from the nature trail area. Walkers along that trail can often see beaver dams on the river, squirrels, wild turkeys and a variety of birds. Geese and ducks make their homes at the pond.

“I’ve noticed that as it’s warmed up and since we’ve got this stay-at-home order there are quite a few people out there walking,” he said. “I think people are wanting to get out, and they can distance themselves and get sunlight and vitamin D.”

In Norton, a six-foot-wide concrete trail completed along Armory Drive in June 2018, as well as a nature trail along the dike in Elmwood Park that was completed last fall, are giving residents options for outdoor exercise.

The Cottonwood Trail in Elmwood Park winds through cottonwood trees near Prairie Dog Creek. It was completed last fall by local volunteers on the Norton Trails Committee utilizing tools from the same Trail in a Box trailer that Bohl later brought to Phillipsburg.

Katie Allen, executive director of the Norton Regional Health Foundation and ex-officio member of the board of LiveWell Norton, said construction of the hard-surface Armory Trail in south Norton started in 2017. A $15,000 Hansen Foundation grant helped pay for the cement used by six-man offender work crews from Norton Correctional Facility. The crews utilized city equipment to create the path.

The half-mile path borders a row of trees near the elementary school and connects with another half-mile of existing sidewalk.

“It’s a pretty area of town, and it’s located close to the elementary school and retirement community housing,” Allen said. “It’s really neat to see so many different people of all ages and all physical activity levels using it.”

She said that recently some children took sidewalk chalk and drew instructions on the path, telling people when to run, hop, skip, etc.

“They kind of made a little map to do physical activity along that whole trail,” she said.

She said she thinks the path has been important for people who otherwise stay at home, especially because the school track has been closed for resurfacing.

“I think people are needing to get out for their own mental well-being — just to get some fresh air and get out of the house,” she said. “I see a lot of families walking together and just keeping their distance. When you meet somebody on the trail, everybody gets to the side, and you wave. You can’t socialize like you used to, but at least you can get out and get some fresh air and see some smiling faces.”

In Colby, an eight-foot-wide concrete trail stretches through trees along the south edge of the Colby Community College campus and continues east onto adjoining city property, circling the aquatic park and a playground area before connecting with the high school parking lot to the south and weaving along the edge of the future site of the city’s new event center to the north. 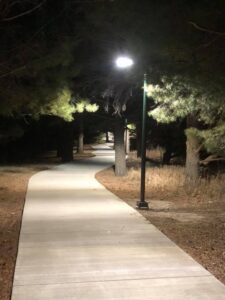 City Manager Tyson McGreer said that in April the city council approved the addition of another trail around Villa High pond, which was recently dredged and resealed.

McGreer said initial work on Colby’s concrete trails was being completed in 2012 when he started working for the city. Since then, “we’ve continued to add to it, lengthen it, change it.”

He said that currently there are more than two miles of hard-surface trail, and in the past year lights have been installed.

“I know on nice days in the spring there are people all over it,” he said. “I’ve seen skateboards and bikes. It is eight feet wide, so it can handle more of that traffic. We’ve got a lot of people that run on it. They’ve hosted some mini-triathlons using it during the Sunflower Festival. If people are outside moving, I’m all for it.”

McGreer said that about 6 years ago, the city developed a master plan for walking, hiking and biking, and the Villa High trail that soon will be developed was part of that plan. He said the trails, as well as a quality healthcare system and a community garden, are helping to improve the health of Colby residents.

“I don’t know if you could ever quantify that because of that trail we saved three lives last year from heart disease, but I can tell you that our health assessment numbers from the state have gotten better over the years,” McGreer said. “I think holistically we’ve gotten better.”