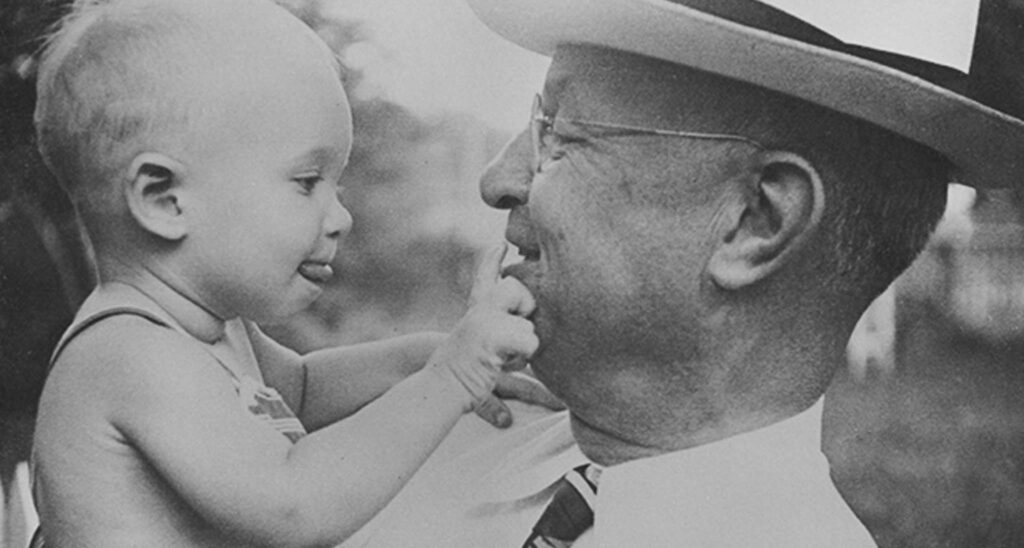 Dane Gray Hansen was born in Logan, Kansas on January 6, 1883. He lived the entirety of his life in Northwest Kansas and died on his 82nd birthday.

Mr. Hansen was one of 6 children, 4 who lived to adulthood and 2 who died as children. His father, Peter Hansen, was a Danish immigrant who came to the United States as a young man to escape unrest in his home country. Peter Hansen was an early entrepreneur. He was a successful businessman who operated numerous mills and a large general store. Mr. Hansen’s mother, Alpha Gray Hansen, was a school teacher and then operated a millinery and a dress shop while raising the Hansen children.

Dane G. Hansen never married, but was deeply devoted to family. He cared for his parents and siblings and had a strong relationship with their children.

A BUSINESSMAN AND ENTREPRENEUR

Dane G. Hansen followed in the footsteps of his parents as a successful entrepreneur. He took over the family business dealings at a young age and managed to grow and evolve those enterprises to serve the people in his home town and surrounding
counties in Northwest Kansas. He had an astute business sense and could spy an opportunity when it presented itself. During WW I, he recognized the need for the army to use mules for moving equipment. He started an enterprise where he bought and sold mules to the military. When the war ended and he was left with mules, he used them to establish a successful business in road and bridge construction. He also ran a lumber yard, and sold veterinary supplies. If there was a need in Northwest Kansas, Mr. Hansen attempted to fill it.  He also started a very successful oil company that continues today.

Despite his busy schedule, Dane always found the time to help others; he was widely recognized within his own community for the generous donations that he awarded for church, civic, and educational activities. He displayed a personal interest in promoting education and helping young people to succeed.

POLITICS BEHIND THE SCENES

Although he never sought or desired public office, Dane Hansen was civic minded and participated in politics behind the scenes. He was a personal friend of former President Dwight Eisenhower, Dane was a member of the President’s Commission on Inter-Governmental Relation in 1954 and 1955 and served as Vice-President of the Board of Trustees of the Eisenhower Foundation.

Mr. Hansen was always interested in young people. He established the Dane G. Hansen Boy Scout Camp at Kirwin and scholarships for graduates of Logan High School. His generosity toward church, civic and school-related activities in his home community were legendary. He was also active in his business associations. He served as vice-president and director of the Kansas Independent Oil and Gas Association, chairman of the Kansas Contractors Association Pension Trust Plan, and past president of the Kansas Day Club.

Dane G. Hansen was a man who amassed an enormous fortune without losing the common touch. He was sincere and industrious. He was an astute businessman who knew the value of a dollar and insisted on honest workmanship. At the same time, he was generous in his personal relationships and had good friends in all walks of life.

He was dignified but never austere, straight but not unbending, forthright but compassionate. He was an outstanding citizen in every sense of the word, and the Trustees of the Hansen Foundation believe he would be pleased that his fortune can now be used to help others.