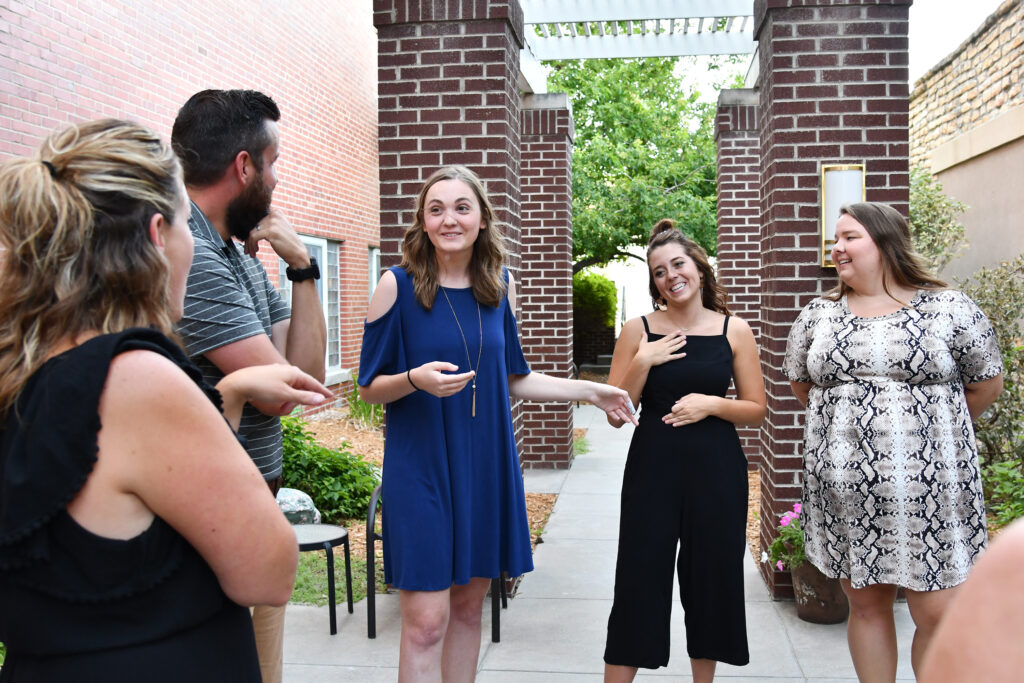 Julia Rabe, executive director of the Beloit Area Chamber of Commerce, and Beloit City Manager Jason Rabe discuss plans with community interns Kelsie DeWitt, of Hays, a senior at K-State; Kollette Keeten, of Phillipsburg, who graduated in May from Fort Hays State; and Maci Hancock, a Fort Hays State student from Mankato. [PHOTO BY ERIN MATHEWS]

In Beloit, the Dane G. Hansen Foundation funded two interns, and the community found funding for a third, Maci Hancock, a Fort Hays State student from Mankato who helped create a group for young professionals.

Kollette Keeten, of Phillipsburg, who graduated in May from Fort Hays State in graphic design, worked on a variety of projects, including wayfaring signs and a new logo for the city. She also designed marketing materials for Lakefest, a fundraising event held for the first time this year.

She created signs for north and south entrances to Beloit with parts that can be changed to keep the sign interesting.

Kelsie DeWitt, of Hays, a senior in architecture at K-State, worked up drawings for a master plan of improvements proposed for Chautauqua Park and the city sports complex. Amenities proposed for the park in surveys and public meetings included a splash pad, playground, new community building, stage, walking trails, fishing docks, a dog park, updated basketball courts and a sand volleyball court.

Two new ball fields and other improvements were proposed for the sports complex, but the feature that seemed to excite most people was a 300-space parking lot.

“We were super fortunate to have their expertise and their passion and their energy,” Rabe said. “They’ve helped conceptualize what everyone’s been talking about. People are seeing it, and now that’s what they want — especially the parking lot. Everybody loves the parking lot.”

Interns can also be of assistance when it comes to new technology.

Jack Polifka, a Northwest Tech precision ag student, was one of two Kansas Extension Service interns who conducted 4-H day camps about unmanned aerial systems. He said kids enjoyed the camps, and he found a lot of interest among their parents as well. In his appearances at county fairs, farmers had lots of questions, too.

“We’ve got a lot of guys that are ready to pull the trigger on a drone, but they have questions like, ‘Do I have to be certified?’ ‘What do I do with it?’ ‘What’s it going to cost me?’” he said.

At the day camps, Polifka helped children enter coding for and fly small drones, using their cell phones as controllers. He said children came to the camps with a diverse level of experience.

“We had a kid who took his drone all apart and rebuilt it and put different parts in it, and he’s 11 years old,” he said. “It’s interesting to see things like that and see all the different levels of interest and knowledge that we have.”

He said professional possibilities for drone use in the area include assessing crops, monitoring livestock and other ag applications; inspecting difficult to reach places, such as roofs, powerlines, bridges, radio towers and flooded rivers; search and rescue; and filmmaking.

“There are a lot of different avenues they can go,” he said. “Very quickly, as drones become a bigger industry — and we can prove that we’re responsible, that they work and people aren’t doing bad things with them — they’re going to become more and more used.”

He said it’s important that kids are taught safety procedures from an early age, just as they would be for use of a gun or pocket knife.

“If you already have all those safety fundamentals and rules in your head, it’s second nature to you when you are flying something big,” he said. “Unfortunately, if you have something big like an agricultural spray drone – especially if it has chemicals in it — we can’t really afford to have mistakes.”

He said he would recommend continuing the day camps for kids next year, but also adding chances for area producers to learn more.

“I’m going to try to write up my experience (in a final report) in a way that they’ll do this again,” he said. “It’s been great for me, and the kids want to do it again.”

Cut the chicken, onions, tomatoes, and peppers. Wash chicken in water with turmeric. Set aside.

Wash and prepare the rice (2:1 ratio, rice to water, plus a few cardamom pods). Cook.

In a large saucepan over medium high heat, pour 4 tsp. oil, 3 pieces of cinnamon bark, 3 broken cardamom pods, and 5 cloves. Let cook for a minute. Add the green chilies (optional), 1 tsp. cumin seeds, and 3 bay leaves and fresh onions until the onions turn golden brown. Add the tomatoes, salt, ½ tsp. turmeric, ½ tsp. garam masala, ½ tsp. chicken masala, ½ tsp. ground cumin, ½ tsp. ground ginger, ½ tsp. nutmeg, and ½ tsp. asafoetida. Cook until the oil comes out on top of the gravy and the tomatoes are soft. Add the chicken and marinade, stirring quickly so the yogurt doesn’t separate. Cook for 30 minutes and add the chopped bell pepper and then cook until the chicken is cooked through.

Remove from heat. Add fresh cilantro and a dash of lemon juice and let sit for 5 minutes. Serve.

Substitutions:  You may substitute cauliflower or eggplant for the chicken. If you choose to, do not mix with the yogurt, but with oil instead. And don’t add the cinnamon. You can add mushrooms and paneer when you are adding fresh vegetables to the pot of oil and spices.