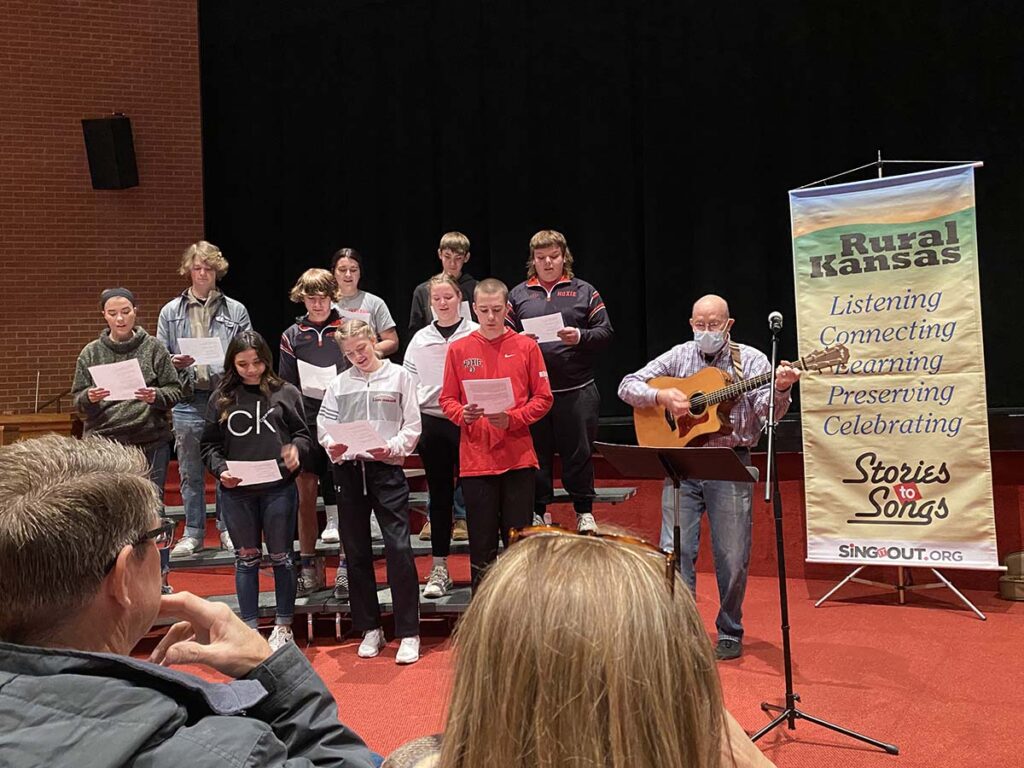 A Song For You

HOXIE – Probably the last thing any of the six people sitting up front in the Hoxie High School auditorium on a Friday in January expected to happen was to have a song written about them. The song writers didn’t expect to be writing and singing original compositions either. But life can surprise you in some fun ways.

David Leopold was among six long-time Hoxie residents who got to hear the wordsmiths from high school English classes sing about their lives during a Jan. 14 Stories to Songs program facilitated by Wichita teaching artist Aaron Fowler. Leopold, who worked as a mortician and continues to work part-time as a certified public accountant, confirmed that he never thought of his life as the stuff of song. But that Friday as one of the junior classes sang to him, it was.

When he was young, he worked at his father’s store

Then he came to realize that he wanted more

He found another calling and became a mortician

Wasn’t quite enough he was an accountant in addition

“I’ve never had that happen before,” Leopold said afterward. “It was different. It was nice. I enjoyed that very much.”

Sally Cameron inspired a song entitled All Gas No Breaks. It included these words:

She went to Japan, a foreign land

With a trombone in her hand

Played in Chicago with her band

She is everything but bland

Sophomore Emily Villegas said she enjoyed interviewing Cameron with her English class. She said it was good to hear from a Hoxie resident who had lived such an interesting life.

“Learning about that made me feel more involved with our community,” Villegas said.

“I’ll hold on to that memory forever,” she said.

Cameron said the sophomore class interviewed her on Jan. 10, and she told them she’d been part of the largest class ever to graduate from Hoxie High. There were 84 kids in her class, which she guessed was close to the number in the entire school now. Cameron, who used to direct high school musicals and still plays accompaniment for kids going to competition, was pleased to hear the students singing to her about her.

“I believe in being able to sing, and they were all singing,” she said. “They all jumped in and had fun doing it. It meant a lot to me. I thought it was a really cool thing for fine arts.”

Other “community elders” immortalized in song were Harry Joe Pratt in Stand Tall and Proud, Ed Heim in Strong Foundation, Linda Frazey in Set Your Spirit Free and Ruth Pieschl in Come Waltz with Me.

Pieschl, who has lived in Hoxie for 48 years, said she “really, really enjoyed going down Memory Lane.”

She said she was surprised to have a song written about her – “I’m just an old lady” – and felt like the class who wrote her song did a “super, super job.”

Fowler, who worked with six English classes to write the six songs, said after each class interviewed their subjects, he asked them to select a theme that stood out to them during the interview. That became the song’s title.

He said it’s typical for high school students to ask a lot of questions about high school during interviews.

“I try not to have too heavy a hand in the interview process. I just let them go with questions they have,” he said. “For students, they ask about where they are. They don’t think about what it is to be an adult because they’ve never experienced that before.”

He said after the interviews, he talked with students about the song writing process. They thought about keywords and phrases, how to use rhyming words and formed verses to match a chorus and music that he wrote. By Friday, the songs were ready to perform. The students sang, accompanied by Fowler on guitar.

Junior Tori Bainter said she really enjoyed working with Fowler. She said her class got to know one of their favorite elementary school teachers better – Linda Frazey.

“Writing our own song in 45 minutes was rewarding,” she said. “It was just something different from the normal routine, and it was nice doing something for the community.”

Villegas said Fowler “brought a lot of enthusiasm, and you could tell he was very passionate about his work.”

“He brought a lot of creativity into our classroom,” she said. “Overall, it was a very fun experience.”

Fowler said he travels the United States conducting similar residencies for students of different ages as part of his nonprofit, Sing It Out. Fowler is on the Kansas Touring Roster, and his residency in Hoxie was sponsored by the Kansas Creative Arts Industries Commission and the Sheridan County Community Foundation.

At first, Pratt assumed Fowler would want to work with music classes, but he got in touch with English teacher Peggy Eland when Fowler explained that he’d prefer to work with writing students. As it turned out, Eland and Fowler had their own high school memories of each other – him on stage, her in the orchestra pit – decades ago when they were both students in Topeka.

Eland said her students were nervous about having to perform but “they did a fantastic job.”

“Some of my kids who don’t normally get into English assignments really enjoyed this,” she said.

Pratt and Eland brainstormed about who to invite to participate as community elders.

“We just tried to find people we knew were really embedded in the community and had a multigenerational aspect of the family and businesses and things like that,” he said.

Karl Pratt said he enjoyed sitting in on the interview process and seeing what parts stood out to the students when he heard the songs.

“The songs were really good,” he said. “The lyrics – some of them were funny, some were heart felt. They all did a great job of kind of encapsulating the individuals. Of course, it’s quite a treat to have a song written about you and your life.

“It was such a neat program – one that we definitely hope to do again.”